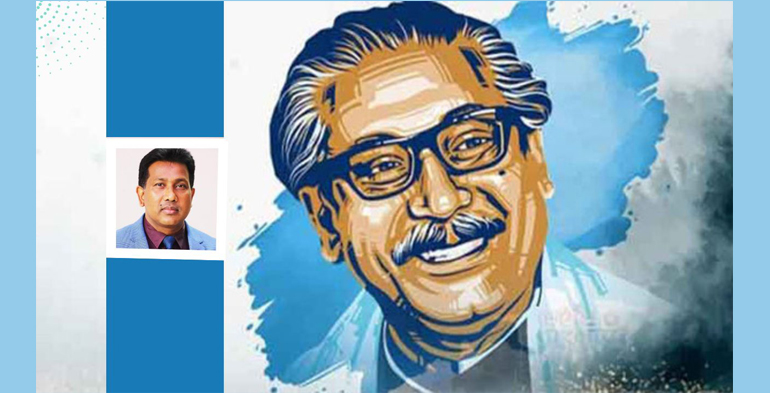 Prof. Dr. A.K.M Zakir Hossain:On 15 august 1975, the greatest Bengali of all time, Father of the Nation Bangabandhu Sheikh Mujibur Rahman and most of his family members were brutally killed by some ambitious misguided army personnel as part of a domestic and foreign conspiracy. The self-confessed killers did not spare the 10-year-old child Sheikh Russell that night.

This brutal and cowardly act stunned a nation. Bangladesh grieved for the man who brought the nation into being, freeing our people from the oppressive forces of the Pakistan army. The loss of the Father of the Nation is a loss that Bangladesh can never recover from. In fact, it is a loss of incalculable magnitude. Bangabandhu had boundless love for his country. He loved the people of the country more than life itself. On the one hand the people of the country were his source of strength and inspiration.

In 1972, famous British media personality David Frost, while interviewing Bangabandhu, asked him, 'What is your greatest strength? Bangabandhu replied, 'I love my people.' After that Frost asked him - 'What is your greatest weakness?' Bangabandhu replied, ‘I love them very much.’ It is truth that, Bangabondhu Sheikh Mujibur Rahman never died. He is alive in the hearts of billions of people of the world and in the hearts of almost all Bengalis except the successors of the traitors and their few followers. The famous writer Annadashankar Roy wrote about everyone's life in an incomparable choice, ‘As long as Padma Gouri Meghna is alive, as long as your glory is Sheikh Mujibur Rahman.’ Sheikh Hasina, the daughter of Bangabandhu, returned to her homeland on May 17, 1981, and came to power for the first time in 1996. Like father, like daughter. With her extraordinary sacrifice and leadership, paved the way for the establishment of the spirit of liberation war, the values of freedom and democracy in the country and made an outstanding contribution to the welfare of the country and the nation, building a modern, developed and non-communal Bangladesh.

The two dreams of the father of the nation were to make Bangladesh independent and to make Bangladesh a hunger-free, poverty-free golden Bengal. The first dream was realized by Bangabandhu. He was killed with by his family members when he was on the way to realizing another dream. At present, under the visionary wise leadership of Sheikh Hasina, Bangladesh is on the way to realize the second dream of the father of the nation.

After 21 years under the leadership of Bangabandhu's daughter Sheikh Hasina, Awami League formed the government in 1996. The work of rebuilding Bangabandhu's dream began. The government under the leadership of Prime Minister Sheikh Hasina has been working relentlessly to transform the dreams of Bangabandhu into reality. Bangladesh has now been recognized as a 'middle' income country from a 'lower middle' income country. The current government has formulated an action plan to take the country to the level of a developed country by 2041. Bangladesh is now the role model of development in the world today.

Bangabandhu is our source of inspiration to face different challenges,the pandemic ravages and recent Russia-Ukraine conflict have triggered turmoil in the financial markets, and drastically increased uncertainty about the recovery of the global economy and we are facing with challenges of a magnitude we have never faced before. Much of the progress made in the past years has been undone by this pandemic and now another crisis Russia Ukraine war has seriously caused turbulent backdrop of global inflationary pressures amid rising food and energy prices and disrupted supply chains. We want peaceful end of this war and we can take inspiration from Bangabandhu’s spirit to soldier through different crises.

No matter how tough things got, Bangabandhu never gave up, and he never gave in to despair. Many times, the odds were against him, but he always kept faith in the people of Bangladesh, and our ability to prevail, and emerge victorious. Time and again conspirators have come forward with this August as their target to make the nation leaderless. At the moment, those conspirators have temporarily shut themselves down. They can throw their tantrums whenever they get the chance. For that, there is a need for the vast masses of the country to be vigilant against the conspirators. It is the need of the hour to identify the masterminds of the murders and conspiracies and uproot them from the society and the country to ensure that no August returns again.

Bangabandhu was the voice of the deprived, oppressed and emancipated people not only of Bangladesh but all over the world. The entire world was shocked to hereby his brutal killing with family members brutality. The big question remains for them, followed by the freedom-seeking people of the world, the undisputed leader of Bengali, whose main goal in life was the political, economic and social liberation of the people, why should he be killed? The world was surprised - the great leader who struggled for 23 years and spent 14 years in prison and gave a nation a national language, freedom and sovereignty, had to be martyred by the people of his country.

Bangladesh is a fortunate that, Bangabandhu's successor honorable prime minister Sheikh Hasina as the leader of Bangladesh Awami League, the leading party in the freedom struggle. After 21 years of struggle against the intolerant dictators, she was elected by direct vote of the people and took assumed the responsibility of running the government in 1996. By repealing the Indemnity Ordinance, she Bangabandhu removed the obstacles to the trial of murder of Bangabandhu. For 21 long years, she removed the stigma of injustice and ensured justice. In 2009, when leader Sheikh Hasina assumed took the responsibility of running the government again, the legal process of Bangabandhu's murder case was started again for getting real justice. After 35 years, the trial of Bangabandhu`s assassins has been partially executed and the rest of the accused have fled to different countries. The fugitive convicted killers of Father of the Nation and his family members will not go unpunished. Rest of the fugitive convicts will be brought back to the country and executed on this soil so that no one can dare to commit such type of heinous crime.

However, the conspirators and their associates could not erase the name of Father of the Nation Bangabandhu Sheikh Mujibur Rahman from people's minds as long as Bangladesh existsBut they could not erase his name from the hearts of the Bengali nation.. Bangabandhu said, ‘the leader may die, but the ideal does not die’. Bangabandhu's philosophy and political philosophy will continue to be a source of inspiration for present and future generations. Bangabandhu Sheikh Mujibur Rahman will forever remain in the hearts of every Bengali.

Writer is a Vice-chancellor of Kurigram Agricultural University.