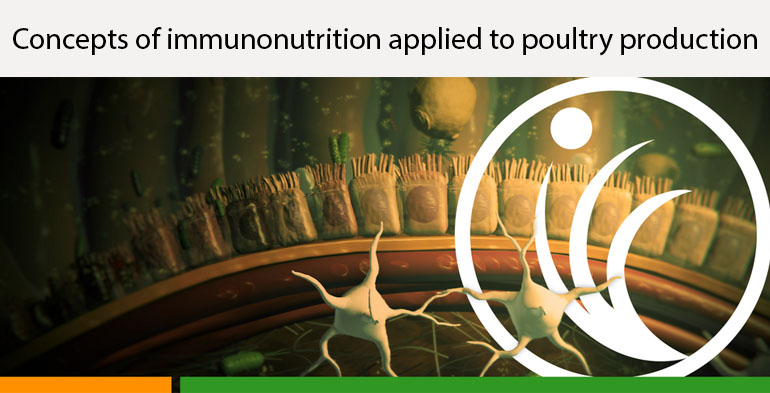 Melina Bonato, Global R& D Manager, ICC Brazil:The term immunonutrition has originated from some human studies conducted in the 1950s and suggests that there is a link between malnutrition and the occurrence of infections (Shetty, 2010). In the 1980s and 1990s, other studies investigating population monitoring data for decades corroborated this concept. Since then, the immunonutrition in humans has been investigated in many broader aspects and is considered a multifactorial science, since nutrition is related to nutrient digestion and absorption in the gastrointestinal tract, microbiota, immune system, organs involved in the inflammatory processes and their secondary effects, nervous system, hormone production, etc.

This concept has been understood and applied to animal nutrition for a long time and this is due to the advances in knowledge of nutrition, health, management, and environment fields. However, only in recent years the term “immunonutrition” is being effectively applied.

It is important to understand that, in addition to being responsible for the digestion and absorption of nutrients, the gastrointestinal tract is an essential organ for the immune response. In poultry, approximately one quarter of the intestinal mucosa is composed of lymphoid tissue and over 70% of it consist of immune cells (Wershil & Furuta, 2008). Gut-associated lymphoid tissue (GALT) is the main component of mucosal-associated lymphoid tissue (MALT) and it is also a significant source of immune cells that monitor and protect the intestinal mucosa layers. GALT is continuously exposed to dietary antigens, microbiota, and pathogens (Dalloul & Lillehoj, 2006). Then, the development and maturation of the immune system can be affected by external factors (environment, management, sanitary conditions, diet, etc.) and factors that are inherent to the animal (genetics, age).

These factors also impact the microbiota and intestinal health. The intestinal microbiota has many functions in the organism and plays an important role in the gut-brain axis bidirectional communication (Cryan & Dinan, 2012). In other words, the central nervous system (CNS), via the hypothalamus-pituitary axis, can be activated in response to stress factors, thus releasing cortisol. Cortisol affects the immune cells, which start to release pro-inflammatory cytokines, which in turn influence the intestinal permeability and can lead to microbiota changes (Landeiro, 2016).

Besides having the function of absorbing nutrients, the intestinal epithelium acts as a physical barrier. If the intestinal permeability is impaired, microorganisms and lipopolysaccharides (LPS) can pass through the lamina propria, activating the immune cells and releasing pro-inflammatory cytokines which will affect central and enteric nervous system (Gareau et al., 2008). Several physiological changes may result from these responses, including fever, metabolic inefficiency, skeletal muscle catabolism and synthesis of acute phase proteins (Korver, 2006). Also, an impact on energy and nutrients which would be used for growth may be observed.

Therefore, the pro-inflammatory response caused by any of the factors mentioned above can result in a compromised immunocompetence. It is very important that the poultry develop their response and protection abilities throughout life, i.e., that these abilities are modulated each day, since the metabolic cost vs. an induced immune response is low and directly affects the maintenance of metabolic homeostasis.

According to the established concept of immunonutrition, amino acids (glutamine, arginine, cysteine, taurine), nucleotides, lipids (monounsaturated and polyunsaturated fatty acids, omega-3 fatty acids), vitamins (A, C and E) and trace minerals (zinc and selenium) (McCowen & Bistrian, 2003) are classified as immunonutrients. There are also some immunomodulating substances that are not absorbed like nutrients but are able to modify the immune system response, directly or indirectly, such as prebiotics, probiotics, phytotherapic compounds, organic acids, and others.

β-glucans are among the most studied immunonutrients available in the literature and are derived from the yeast cell wall (β-1,3 and 1,6-glucans). Their mode of action consists of recognizing phagocytic or antigen-presenting cells present in the lamina propria just below the intestinal epithelial cells. These cells have on their surface a type of receptor called a toll-like receptor, which recognizes microbial patterns and induces an immediate innate immune response. After this activation and phagocytosis, the phagocyte presents a processed fragment of the antigen and stimulates a chain response. Pro-inflammatory cytokines are released and activate the production, release and mobilization of additional phagocytic cells, proliferation of goblet cells (mucus production), among other effects. The recognition of pathogens and antigens by the innate immune system triggers immediate innate defenses and the activation of an adaptive immune response (Lee & Iwasaki, 2007).

The activation of the innate immune system by β-glucans is known as immunomodulation, since there is no damage to the intestinal epithelium or invasion of epithelial cells, and only response modulation is observed, putting on alert the innate immune system cells and preparing the animal to face the challenges of production, with low metabolic cost. This is a key factor for:

– Young poultry in which the immune organs like Fabricius bursa are under development. This organ is responsible for the production of precursors of antibody-production B cells (specific immune system), and depends on the innate immune response;

These benefits can be measured through the quantification of antigen-presenting cells circulating in the blood, helper T  (CD4) and cytotoxic T (CD8) lymphocytes, immunoglobulins (Bonato et al., 2020), vaccine titers and others. Thus, effects on the maintenance of intestinal permeability may also be observed, since as mentioned previously there is a close relation between the microbiota, the intestinal permeability, and the immune system.

There is still a lot to be studied about the microbiota-intestine-brain axis given the complexity of the associated factors. However, the use of immunonutrients, individually or in combination, has been proven to promote benefits for health, welfare, growth and productivity of the animals. Therefore, it is crucial to fully understand their mode of action to enable a correct monitoring, measure the benefits and quantify the return on investment.