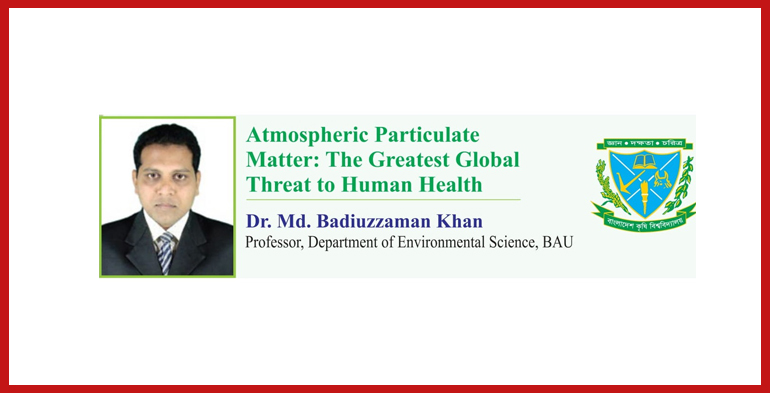 Dr. Md. Badiuzzaman Khan:Particulate Matter (PM) is the small solid particles and liquid droplets suspended in air. According to Seinfeld and Pandis (2006), PM is the suspension of fine solid or liquid particles in a gas. Atmospheric particulate matter ranges in size from a few nanometers (nm) to tens of micrometers (µm) in diameter.

Particles are defined by their diameter for air quality regulatory purposes. Scientists all over the world are concerned about this air-borne particles because particles with a diameter of 10 microns or less (PM10) are inhalable into the lungs and can induce adverse health effects. Particulate matter, PM10 penetrates thorough the upper airways (nose, mouth, nasopharynx and larynx) and can be settled in conducting airways (bronchi and upper part of lungs). Particulate matter, PM2.5 can be deposited in gas-exchange part (deep) of the lung, whereas ultrafine particles (< 100 nanometers) deposit in alveoli and may penetrate through the lungs to infect other organs (Hester and Harrison, 2009).

Various epidemiological and toxicological studies have provided evidence that particulate matters are correlated with severe health impacts especially, respiratory, allergic, cardiovascular diseases and even mortality. Research reported approximately 22,000-52,000 annual deaths in the United States (from 2000) and ~370,000 premature deaths in Europe during 2005 due to particulate matter pollution (Mohapatra and Biswal, 2014). A recent study (Lelieveld et al., 2020) reported that Global excess mortality from all ambient air pollution is estimated at 8.8 (7.11–10.41) million/year, with an LLE (Loss of Life Expectancy) of 2.9 (2.3–3.5) years, being a factor of two higher than earlier estimates, and exceeding that of tobacco smoking. The global mean mortality rate of about 120 per 100 000 people/year is much exceeded in East Asia (196 per 100 000/year) and Europe (133 per 100 000/ year).

IITM Scientists conducted research in collaboration with National Centre for Atmospheric Research, Colorado and found that life expectancy in Maharastra dropped by 3.3 years due to exposure to pollution. According to the Air Quality Life Index latest report (Energy Policy Institute at eh University of Chicago), particulate pollution reduces average life expectancy by 1.8 years, making it the greatest global threat to human health (Figure 1).  A number of adverse health impacts have been associated with exposure to particulate matter. Short-term exposures have been associated with premature mortality, increased hospital admission for heart and lung causes, asthma attacks, acute and chronic bronchitis and arrhythmias. On the contrary, long-term exposures have been associated cardiovascular and respiratory diseases and reduction of life expectancy. 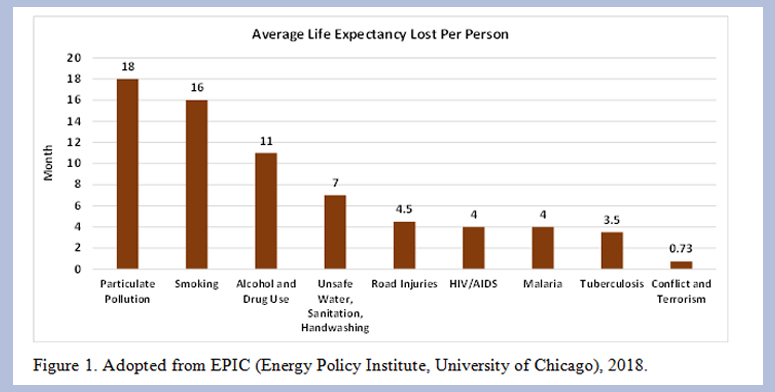 Globally, ambient air pollution caused by industries, cars and trucks and other sources caused 4.2 million deaths. Over 37,000 Bangladeshi peoples die annually from diseases related to air pollution (WHO, 2016). According to World Air Quality report 2018, Bangladesh emerged as most polluted country whereas Dhaka’s air quality has been ranked as second most polluted city in the world. In Bangladesh, 9 out of 10 families use biomass as fuel and traditional cook stoves for cooking. Moreover, 14000 women and 32000 children die every year due to diseases caused by kitchen smoke (VNV Advisory, 2022).

In Bangladesh, the scenarios of particulate matter are jeopardizing day by day. A study conducted on the trend in atmospheric particulate matter in Dhaka, Gazipur and Narayanganj by Rana et al (2016) and found that yearly PM10 concentrations in this area about three time and yearly PM2.5 concentrations about six times higher than the national standards of Bangladesh.

Generally, the concentration during winter season is higher compared to wet season. The main sources of particulate matter in Bangladesh are vehicular and industrial emissions, construction work, brick kiln emission and biomass burning. Brick kilns are responsible for 58 percent of air pollution in Dhaka. We have to produce bricks using eco-friendly technology and use filter at the top of the chimney, introduce mass transportation instead of private vehicles, cover construction site as well as water should be sprayed onto roads of every metropolitan city at least two times during winter to prevent vehicles from kicking up dust. Finally, an environmental officer should be appointed in every upazila for the strong enforcement of environmental laws.