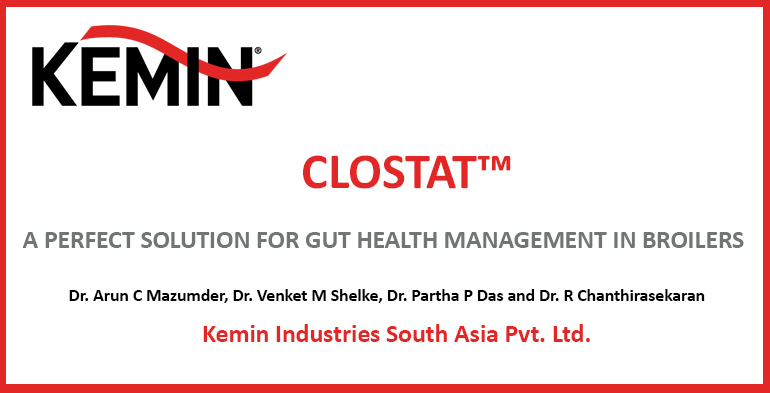 To bridge this economical gap, Kemin came up with the novel probiotic, Bacillus subtilis PB6 (CLOSTAT™), with close monitoring services by technical team, to demonstrate the efficacy and consistency of CLOSTAT™ throughout the year irrespective of different seasons and to minimize the heavy economic losses. Kemin Technical team helps the customer by rescheduling the anticoccidial program in a better way to prevent sub-clinical or clinical coccidiosis.

NECROTIC ENTERITIS AND THE RESPONSIBLE FACTORS FOR DISEASE
Necrotic Enteritis (NE) is the world’s most common and economic disease of broiler and layer, caused by over-proliferation of C. perfringens in the gut. With a shortest doubling time (6-8minute) and an ability to form spores, it cannot be destroyed by pelleting temperature, desiccation and harsh gastric pH (2-2.5). Necrotizing enterotoxins produced by C. perfringens destroy intestine and in severe cases liver. It kills the beneficial gut microbiota that causes indigestion, poor growth, high feed conversion ratio (FCR), unevenness and even death. Generally, NE is seen in 2-5 week old birds with up to 50% mortality in clinical case but most common form as sub-clinical remain undiagnosed. It is responsible for losses of 40% commercial broiler farms which costs USD 6 billion annually to World’s Broiler Industry. 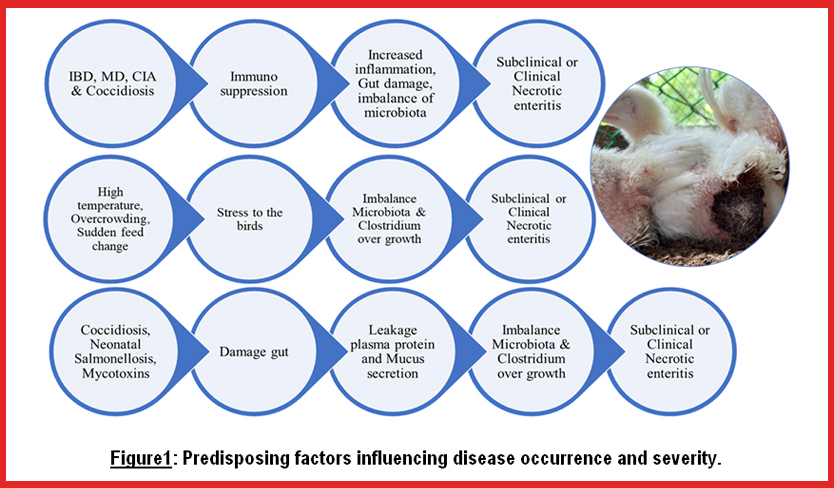 CO-OCCURRENCE OF COCCIDIOSIS AND NECROTIC ENTERITIS
All Eimeria spp., mostly E. maxima influence the C. perfringens growth by, (1) damaging the intestinal wall causing leakage of serum protein; growth factor and vitamins in the gut utilized by the clostridia; (2) by the way of T-cell mediated inflammatory response causing high secretion of mucous (mucin) fed by clostridia having mucolytic ability.

PREVENTIVE AND CONTROL MEASURES FOR NECROTIC ENTERITIS
Probiotics are used from ancient times as curd for humans till present state and used for both humans and animals. Advancement in science well describes the features of second generation probiotics, their role on gut health and growth promotion in poultry. Many species of microbes are used as probiotics like Bacillus, Lactobacillus, Enterococcus, Streptococcus, Bifidobacterium and Saccharomyces, but Bacillus spp. was a step forward due to their spore-forming ability, which can survive during pelleting process. Importantly, the probiotic efficacy greatly varies with the species of Bacillus genus. All the strains of Bacillus subtilis are not equally efficient due to their difference in activity, survival and persistence in gut. This is the main cause of variable confidence on probiotics and the developing dissatisfaction after using probiotics in broiler feed. Bacillus subtilis PB6 is a widely studied species, having well scientific documentation of natural characteristics with the mode of action and proven to show consistently a highest effectiveness on maintaining gut health integrity and growth promotion in poultry. 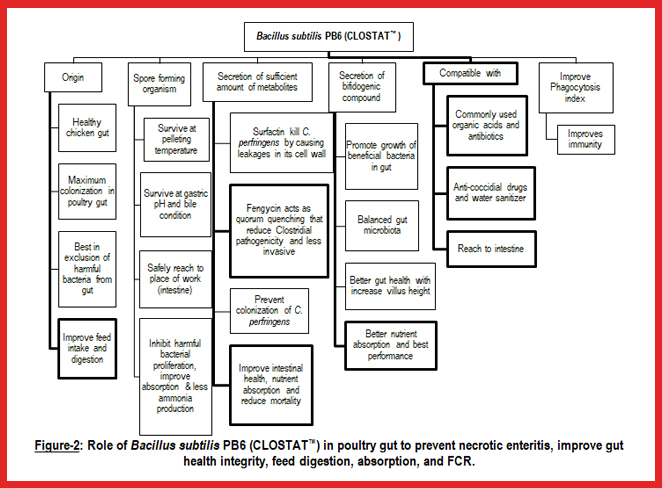 STUDY OBJECTIVES
The objectives of current study were to evaluate and confirm the efficacy of CLOSTAT™ at field conditions with different managemental practices, where feed producers have no control on management.

STUDY DESIGN
A field study was conducted in broiler farms at major broiler production areas in Bangladesh. All the feed producers used different techniques to take care of gut health management programs through the feed. Overall, 81 broiler farms were randomly selected for lesion scoring throughout the year of 2019 and a total of 27 farms in 2020. Lesion scoring was done by following the method of Johnson & Reid for Coccidiosis, and for Dysbacteriosis, used a lesion scoring method that was adapted from Teirlynck, et. al. Analysed data were compared between CLOSTAT™ Users and CLOSTAT™ Non-Users groups. 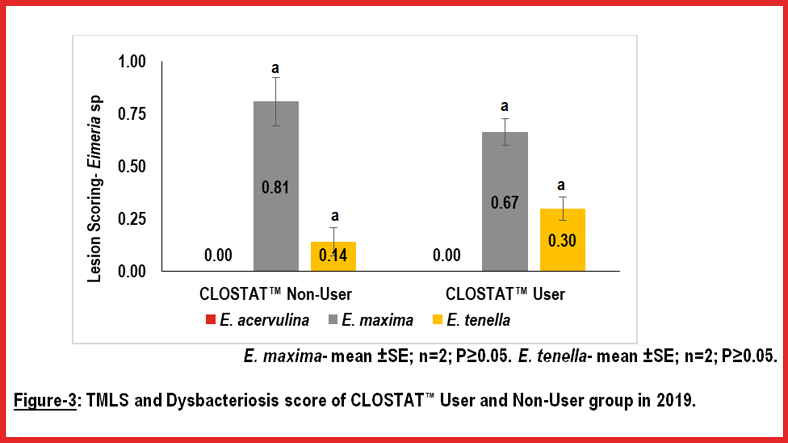 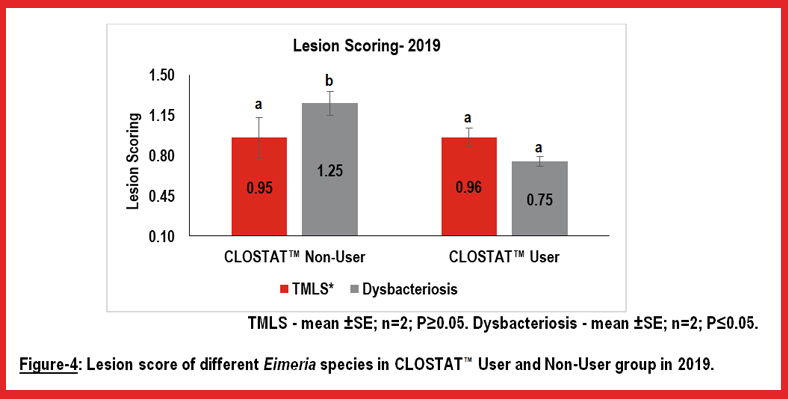 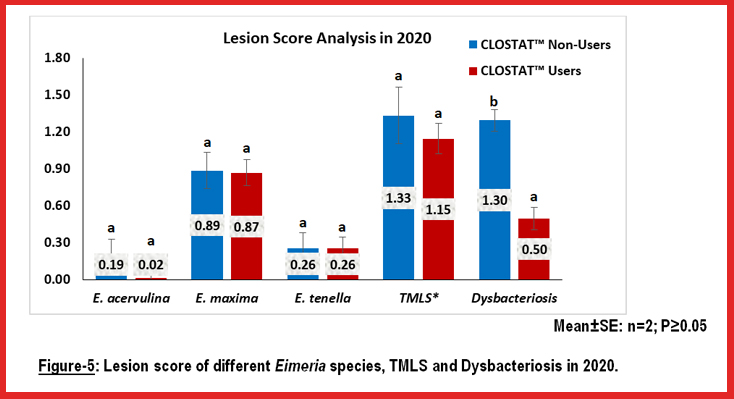 CONCLUSION
Kemins technical team intestinal health monitoring services effectively helped feed producers to properly schedule CLOSTAT™ usage throughout the year as a complete replacement solution for AGP to control dysbacteriosis and provide perfect anticoccidials rotation throughout the year. The current study determined that CLOSTAT™ is an effective solution for maintaining the optimal gut health in broilers resulting in better economic returns throughout the year of 2019 & 2020 in Bangladesh.