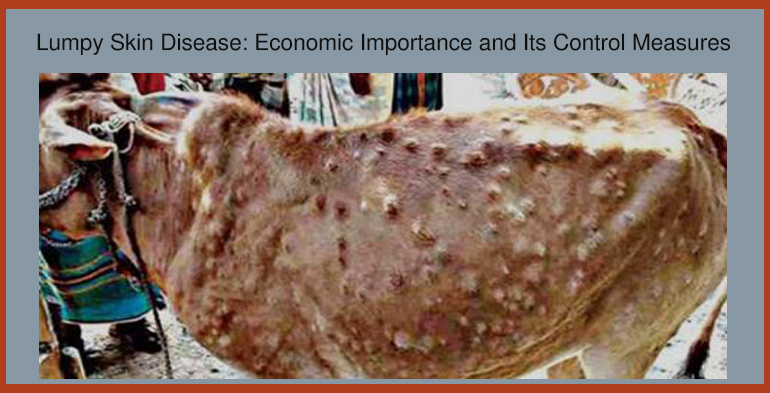 Dr. F H Ansarey:Lumpy skin disease (LSD) is considered as a major economically important disease of cattle, with substantial impacts on livelihoods and food security, particularly among smallholders. It is a viral disease of cattle caused by the lumpy skin disease virus (LSDV). Morbidity rates vary between 10 to 20% with a 1-5% mortality rate (DLS, Situation Report, LSD 2019).

Moreover, LSD causes enormous economic losses which include sharply decreased milk and beef production, loss of draft power, increased abortion rates, infertility, damage to hides, mortality, increased treatment costs, embargo on trades. According to DLS report (Situation Report, LSD, 2019, 2019), a total of 553,528 cattle was affected by LSD in all 8 divisions in 2019. However, the highest incidence occurred in Chattogram (8.26%) and Khulna (6.52%) and lowest in Sylhet (0.01%) (DLS, 2019). Again, in 2020 and 2021 the LSD outbreaks were reported in different areas of the country.

The climatic conditions of Bangladesh are favorable for the propagation of vectors especially in monsoon, which may influence the rapid transmission of LSD in the cattle. Therefore, LSD may appear as a big challenge to cattle health in Bangladesh in near future. Vector control, maintaining proper biosecurity along with vaccination can play important role in controlling the LSD in our country. Vaccination has been proven as the best tool for quick and effective control of LSD, as it reduces the total number of susceptible animals within the population and prevents entry and spread of the disease (European Food Safety Authority-EFSA, 2019). Heterologous vaccine (goat/sheep pox vaccine) usually induces incomplete and weak protection compared to a homologous vaccine (Neethling strain) which confer a solid and durable immunity (EFSA, 2019, 2020). Alexandrov (2018) and MCI (2020) reported that the live attenuated Neethling strain vaccine provides the best protection.

ACI Limited has got approval from the government to introduce a homologous attenuated Neethling strain vaccine (called BOVIVAX LSD) from M.C.I Santé Animale Company in Bangladesh. This vaccine is produced as per European GMP requirements and is also registered in the EU. Now the farmers can prevent and control the disease in a better way using the readily available BOVIVAX LSD vaccine.