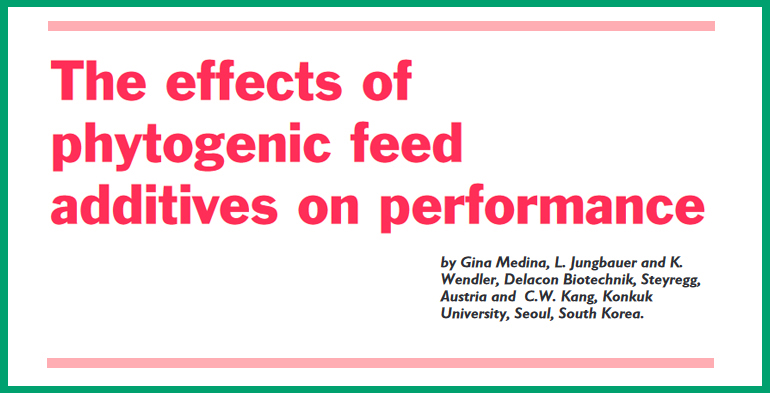 by Gina Medina, L. Jungbauer and K.Wendler, Delacon Biotechnik, Steyregg, Austria and  C.W. Kang, Konkuk University, Seoul, South Korea:The poultry industry today faces challenges such as rising feed and production costs apart from the demand of being one major source of animal protein in response to the growing global human population in the perspective of food safety and security.

The ban on the use of in-feed antibiotics in Europe has influenced the increasing awareness of the consumers for food safety and health risk. Documented negative effects of using antibiotic growth promoters in feed triggered the continuous evaluation of in-feed natural growth promoter as an alternative. For the last 10 years, the studies on the use and benefits of natural products in the animal industry increased significantly. 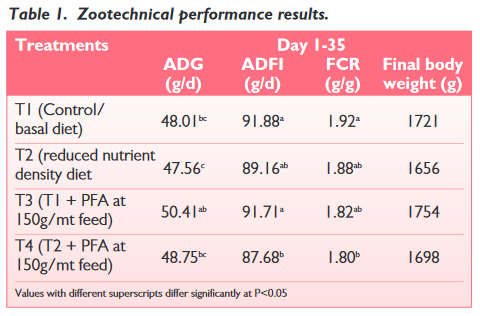 Materials and methods
A total of 840 male day-old Ross 308 male broilers were randomly distributed to four experimental treatments based on a 2x2 factorial design, supplementation of commercial phytogenic feed additive (Biostrong 510) and the recommended and reduced dietary nutrient levels respectively.

Each treatment was replicated seven times with 30 broilers per replicate. The birds were fed with corn/soy starter (1-21 days) and finisher (22-35 days) mash rations for 35 days based on the following treatments:

Broilers were inoculated with commercially available live NDV vaccine by intra-muscular injection on the 14th day of the experiment.

Blood was taken from the jugular vein from two weeks after injection. Serum samples were analysed for anti NDV antibody titers by ELISA with commercial kits, following the manufacturer’s directions. 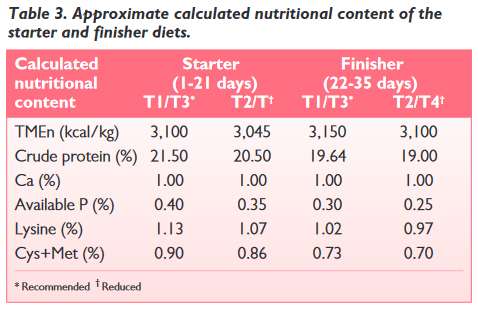 Reduction on nutrient density level lowered feed intake and daily weight gain which resulted in significantly better feed conversion ratio (T1 vs T2). The addition of commercial PFA product either at the recommended/normal basal diet or at reduced nutrient density diet (Table 3) showed significant improvement in feed conversion ratio after 35 days by 5.2% and 4.2% respectively.  The higher protein digestibility and energy availability on diets supplemented with PFA either at recommended or reduced nutrient density as reflected in Table 2 might contribute to the better body weight and FCR.

An overall statistical analysis has shown that the addition of tested PFA (Biostrong 510) significantly improved (p=0.006) feed conversion ratio from 1.89±0.09g/g in the control groups to 1.80 ± 0.05g/g (-5%) in the groups with PFA on day 35. The results supported other studies conducted demonstrating the beneficial effect of phytogenic feed additives. PFA have shown to stimulate secretion of digestive juices, enhances activity of digestive enzymes and reduces intestinal ammonia formation. The increased secretion of digestive enzymes might improve nutrient breakdown and thus, increase availability and absorption of nutrients.

Based on the blood serum analysis for antibody titer against Newcastle disease virus, the addition of tested PFA at both control/basal diet and reduced nutrient density diets increased the amount of antibody by 12.2% and 21.5%, respectively.

Similarly, the same positive effect on mortality was reflected in diets with the PFA as shown on Table 3. The results demonstrated that PFA added to broiler diets can enhance immunological activity.

Awaad et al. (2010) showed that eucalyptus and peppermint oils are able to implement humoral immune response in chicks against ND.  While Jafari et al. (2009) reported that the addition of fresh garlic to broiler diets has the potential to increase serum γ-globuline in broilers vaccinated against common broiler pathogens.

Conclusion
This study has shown the beneficial and promising effects of phytogenic feed additive (Biostrong 510) on zootechnical performance, immune response and nutrient digestibility in broiler production.