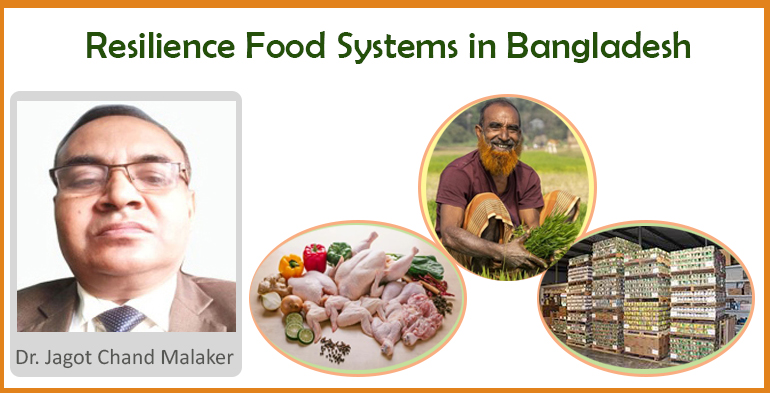 Dr. Jagot Chand Malaker:Food systems (FS) encompass the entire range of actors and their interlinked value-adding activities involved in the production, aggregation, processing, distribution, consumption and disposal of food products that originate from agriculture, forestry or fisheries, and parts of the broader economic, societal and natural environments in which they are embedded.

The food system therefore includes not only the basic elements of how we get our safe food from farm to fork. Today world agriculture is facing major challenges, including how to feed a growing world population, how to reduce rural poverty in the world, and how to manage ecosystem goods and services in light of global climate change. The food system is a complex web of activities involving the production, processing, transport/distribution and consumption. Issues concerning the food system include the governance and economics of food production, its sustainability, the degree to which we have waste food, how food production affects the natural environment and the impact of food on individual and population health.

Now a day’s our food security already been achieved but nutrition security not yet achieved. Regarding nutrition security depends on three factors I. Availability food: Year round vegetables and fruits can be grown in every homestead of every inches of land of our country. It will ensure safe food and nutrition of our peoples. II. Access to food / purchasing capacity: If every household has homestead garden, surplus vegetables and fruits can be sold and can get hand cash and expense that cash to buy his necessary food items to ensure his nutritional security.III. Equal distribution of foods: Women always cook foods and distribute foods among the family members and she always preferred to feed male persons. If any remain foods available women eats that foods, which may not fulfill her nutritional demands so, she faces malnutrition. So, equity needed. Women always sacrifice for her family members.

Farmers of our country are the main contributor of our resilience food systems. Four components of a food system: Production, processing, distribution, and consumption - food systems require many steps, each with a variety of inputs and outputs. Regarding production farmers played vital role to feed us as well as whole nation. Here it is our duty to ensure good agricultural practices in the production levels to get safe food. Department of Agricultural Extension is providing good agricultural practices (GAP) in the production levels through our upazila level setup for the farmers.

Poor Rural people are comparatively more food secure as compared to the urban poor people because they can gather food from their land unlike the urban poor, who has no other option except buying food for them. Therefore food insecurity is more prevalent in urban poor population than rural people.

Population health is also a key factor in addressing food systems challenges, especially as nutrition-related chronic diseases such as obesity, diabetes, cardiovascular disease, and some forms of cancer are major contributors to the global burden of disease.

Bangladeshi people are not even consuming a balanced diet. They are not only deficit in calorie intake but they are also not eating adequate amount of fat, oil and protein. This imbalance in food habits concludes that there is unavailability of non- cereal products, low income and lack of nutrition education.

Staple food of its people is rice since the Neolithic age. The country has a very limited food variety with rice being the major crop followed by wheat and others are fish, meat, vegetable, fruit, egg and milk. Fish is also a major food item.

Bangladesh is a low-lying country hence most prone to the threat of rising sea levels due to global warming. This is a country of many natural disasters like floods, cyclones and famine. Because of these natural disasters, poverty rate and under nutrition rate is kept on rising. Approximately 40million of the population is undernourished and is food insecure.

Bangladesh is a developing country with high population.  Its healthcare system is not strong enough because of lack of medical expertise and facilities. Gender and social status are the main factors that cause unequal distribution of healthcare.

Prevailed Food Systems
Poor water supplies and negligence towards sanitation resulted in outbreaks of disease like diarrhea, typhoid and other waterborne diseases. Every year thousands of people died of these diseases. Since most of the people live in rural areas or slums of major urban areas and almost half or the population is engaged in agricultural practices, rice is the major food for the people living there. They rely on rice for their nutritional needs which make them undernourished due to lack of consumption of other foods like fruits, vegetables, fats, oils and other cereal products. Bangladesh has made many progresses to remove the gender gap from its people in some areas like life expectancy, education, maternal mortality rate, etc., but women are still facing many hindrances in socio-economic and political opportunities.

Regional differences imposed a major difference in poverty status in Bangladesh. Southern region of country is the most prone area to poverty and is highly susceptible to climate change effects. Due to high salinity in soil and water, and floods, rice yield of this area has been decreased. Food habits of the people living in this area includes rice along with meat, fish and vegetables. Due to unavailability of the proper and improved irrigation system, this area lagged behind in rice production.

Recently, the government has taken steps to increase agricultural production including mechanizations, surface water canal, and introduction of crops suitable for multiple cropping seasons and are saline resistant.

Climate Change: The country is facing several challenges to adapt to the climate change activities and their outcomes like rise in sea-level, flooding and many others. Government has taken many steps to adapt to climate change and natural disasters takes place as a result of that. It has developed some early warning systems to alert people about cyclones and floods. It has also developed 2100 cyclone shelters which, in emergency, can provide a safe place to live to millions of people. Government has also taken steps to plant more trees on chars to create islands which are more durable and less susceptible to floods. In fact, Bangladesh is responsible for only 3% emission of greenhouse gases.  Wealthy countries and developed countries are contributing most to the environment deterioration that is harming Bangladesh. Climate change has also been found as the major reason of changes in river salinity in coastal areas, during dry season. Climate change is expected to cause significant changes in river salinity, particularly in the south-west coastal area of Bangladesh during the dry season. This high saline water is not fit for consumption and hence leads to the shortage of drinking water in these coastal areas. Salinity of soil is also increased making the soil unfit for agricultural practices. Soil salinity will lead to reduction of rice yield and indirectly cause poverty among farmers due to low income.

Population Growth Rate: With high population load, pressure on water resources and land has been observed. To meet the needs of people, country has to produce more food and other resources which lead to pollution, depletion of groundwater and also affecting the food production. The country has sufficient equipment to meet the demands of high food production by using high performance crops but the major challenge is to increase production of rice without using groundwater sources.

Lack of Education: Literacy rate of Bangladesh is low, majorly for women. Education is required not only to open ways for future opportunity, but also to understand the body’s nutritional needs and function. People do not have sufficient knowledge about the food needs of body and nutritional importance of food products. They are eating whatever the food is available which is making them malnourished.

Gender Inequality: Bangladesh is male dominant country. Women and men are not treating on the same platform in the country because of pre-occupied mind-set that men are stronger to do the work outside and women should stay home to maintain the household chores.

Government programmes/steps
Many programmes taken by the government for the peoples in past decade to make its people more food secure and to provide them with the best health care facilities of Ultra-poor households.

Food for Education (FFE) program for primary school going students and another programme is Vulnerable Group Development (VGD). This programme is assisted by the World Food Program (WFP).

Conclusion:
Bangladesh has already taken many steps towards reducing poverty and making its food system more resilience but there are still some measures that must be taken by the country. Climate change is the responsibility of all. It must come up with some long term solution to natural disasters. Farmers of our country are the main contributor of our resilience food systems. Regarding production farmers played vital role to feed us as well as whole nation. We have to ensure good agricultural practices (GAP) in the production levels to get safe and resilience food systems.