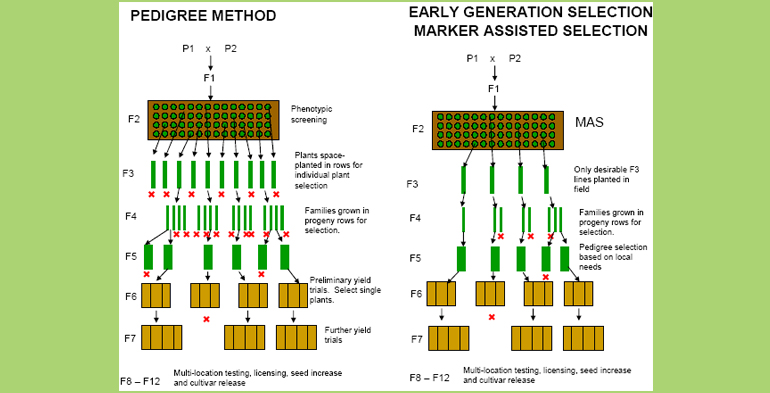 Aqief Afzal, ASRBC, ACI Seed:The development of DNA (or molecular) markers has irreversibly changed the disciplines of plant genetics and plant breeding. While there are several applications of DNA markers in the case of breeding, the most promising for cultivar development is called marker assisted selection (MAS). MAS is a process in which a marker is used for indirect selection of a genetic determinant or determinants of a trait of interest, i.e., abiotic stress tolerance, disease resistance, productivity, and/or quality.

This method involves the selection of plants carrying genomic regions that are involved in the expression of traits of interest through the application of molecular markers. MAS refers to the use of DNA markers that are tightly linked to target loci as a substitute for or to assist phenotypic screening. By determining the allele of a DNA marker, plants that possess particular genes or Quantitative Trait Loci (QTLs) may be identified based on their genotype rather than their phenotype.

The development and availability of an array of molecular markers and dense molecular genetic maps in crop plants have made the application of MAS possible for traits governed by major genes and QTLs. The success of MAS depends on several factors, including the number of target genes to be transferred and the distance between the flanking markers and the target gene. MAS is gaining considerable importance as it can improve the efficiency of plant breeding through the precise transfer of genomic regions of interest and acceleration of the recovery of the recurrent parent genome.

These advantages may translate into
• Greater efficiency or
• Accelerated line development in breeding programs.