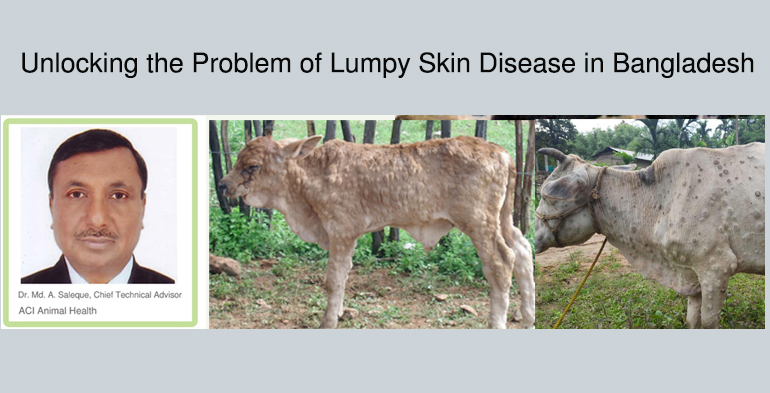 Dr. Md. A. Saleque:
Introduction
Lumpy Skin Disease (LSD) is a viral disease of cattle caused by the Lumpy Skin Disease Virus (LSDV) and is included in the OIE list of notifiable animal diseases. It belongs to the genus Capripoxvirus of the family Poxviridae (Milovanović et al,2019). Morbidity rates vary between 10 to 20% with a 1-5% mortality rate. LSD was first identified in 1929 in Zambia and then spread to Egypt in 1988, still confined in Africa. Currently, LSD is endemic in most African countries. Since 2012 it has spread rapidly through the Middle East and southern and eastern Europe (OIE,2017). In 2015, the disease appeared in Russia, Greece, and Armenia (MCI report, 2020)

Impact of LSD in Bangladesh
LSD causes huge economical losses which include permanent hide damage, emaciation, reduced milk production, abortion, infertility, and death. The outbreak in Bangladesh is having a significant impact on the livelihoods of small-scale farmers, which make up most cattle owners in the country. The cost of providing supportive treatment for 2-3 months during the recovery period is unrealistic for many of these low-income families. According to DLS report (2019), a total of 553,528 cattle were affected by LSD in all 8 divisions in 2019. However, the highest incidence occurred in Chattogram (8.26%) and Khulna (6.52%) and lowest in Sylhet ( 0.01%) (DLS, 2019)

Prevention and Control Strategy
As a vector-borne disease, LSD is almost impossible to control without vaccination. Vaccination is based on live vaccines.
Vaccination Strategies: Heterologous Vs Homologous approach
• Heterologous vaccination is based on Sheep or Goat live vaccines. It induces an incomplete and weak protection
• Homologous strains (Neethling strain) confer a solid and durable immunity
Live attenuated Neethling strain vaccine provides the best protection (Alexandrov, 2018)

Conclusion
Bangladesh government is taking active steps to monitor and control the outbreak with messaging through posters, leaflets, and awareness-raising events and it has been strengthening border enforcement to slow the influx of cattle from India. The government is also trying to prevent the disease by local goat pox vaccine on a limited scale. Private sectors are now encouraged by the government to introduce Neethling strain vaccine to prevent and control the disease in this country. ACI Limited has recently got approval from the government to introduce the attenuated Neethling strain vaccine (BOVIVAX LSD) in Bangladesh from MCI company and this vaccine is produced under European GMP requirements and is also registered in the EU.