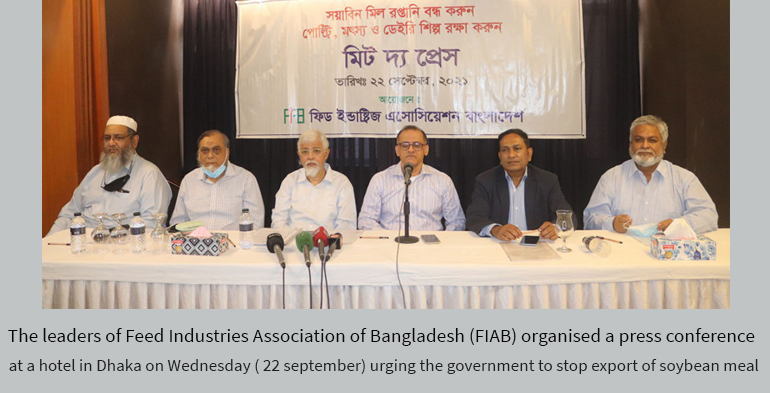 Agrilife24.com:Feed millers have called upon the government to stop the export of soybean meal, a major ingredient of feed for poultry, fish and cattle, for the sake of the livestock industry in the country. The millers said the livestock farmers were deeply concerned about soybean meal export as they are facing huge losses amid the increased production cost.if the export is not stopped, the prices of livestock products will go beyond the purchasing capacity of consumers.

Leaders of the Feed Industries Association of Bangladesh (FIAB) made the call at a press conference at a local hotel in the capital city Dhaka on Wednesday (September 22) as the government has decided recently to export the soybean meal, which up to 20-25 percent used as raw material in feed.

FIAB leaders said, feed producers are in trouble due to the decision to export 'soybean meal' in the fragile situation of the global supply chain. Feed production is being disrupted due to the raw material crisis and prices are being affected. Which is having an impact on the entire livestock sector.

The millers said soon after the government decided to export soybean meal, local producers have increased their prices by Tk 10-12 per kg.They alleged the producers have also created an artificial crisis in the market by reducing the supply of soybean meal which are affecting the production of many feed mills and increasing the costs that led to the closure of many farms. it is necessary to declare a halt to the export of soybean meal, otherwise the price of feed in the country's poultry, fisheries and other livestock sectors will go up. Farmers will suffer huge losses.

The speakers complained that three to four soybean oil producing companies are now exporting soybean meal produced from the soybean seed brought in the interest of the people of the country with zero duty facility.

It was further said in the press conference that despite the open trade, many countries discourage imports by imposing various taxes and duties on various imported products of their own country interest and protection of domestic industries and often stop exports. Exports of rice, onions and other commodities were stopped exports from India due to their internal crisis and rising prices. “When there is an onion crisis in India, they stop exporting onions" FIAB leaders added. But once their soybean harvesting season starts in October, they will no longer import the this raw material.

The FIAB leaders hope that all types of media including newspapers, online, TV and radio from all over the country including Dhaka will come forward to protect this industry. Our media has taken many important issues in the past for national needs. The FIAB leaders also called on the media to take up the issue of stopping soybean meal exports as an agenda.

The people of the country have been in crisis for a long time due to covid situatation. Doctors and nutritionists of the country are advising to consume more fish, meat, milk and eggs at this time. Entrepreneurs in these sectors are cooperating with the government to meet the animal protein needs of the people of the country by keeping the industry alive with the help of farmers. At present the purchasing power of the consumers has declined as employment has shrunk. In this situation, if the price of affordable animal meat rises, both 'food and nutrition security' will be threatened.