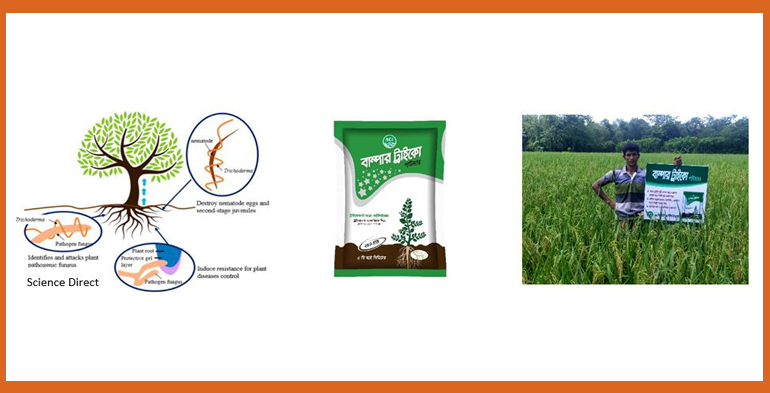 In last cropping season, ACI Fertilizer had arranged demonstration of Trichoderma in some commercial farmers’ fields at Kushtia, Meherpur, Chuadanga, and Jhenaidah for rice and some other crops. The demonstration showed about 10% increase in yield. It also reduced pest and diseases drastically. So, the farmers are now very much interested to use this product.

Trichoderma is one of the beneficial micro-organisms in the agro-ecosystem which influences soil health and crop performance. Its antagonistic feature with plant pathogenic micro-organisms makes it more reliable for use in the field. Its use is not limited to anti-pathogenic activity only. It also acts as bio fertilizer, plant growth promoter, bioremediation, and enhancer for both biological and economic yield.

The role of Trichoderma in improving crop yield and performance is achieved mainly by its ability to degrade complex organic compounds present in the soil. Complex organic compounds are made available to plants in the simpler form so that it could be absorbed. The rate of requirement for chemical fertilizer can be reduced by the application of Trichoderma. A good response has been recorded after applying Trichoderma with compost/ organic manure rather than industrial fertilizers.

Bioremediation and phytoremediation in association with microbes are innovative technologies. They have the potentials to solve various problems related to soil pollution. Trichoderma alleviates contaminants by acting upon chemicals, metal contaminants through the activity of various enzymes. It also improves the physical and chemical properties of soil. Heavy metal contaminants like Ni, Cd, Zn, Pb, As has been tolerated and accumulated by Trichoderma sp. Agrochemicals application in intensive cultivation has accumulated the contaminants, degraded the soil health and crop performance. Trichoderma inoculation in soil has reported to reduce the chemical pollutants and make nutrients available to plants from those agrochemicals too.