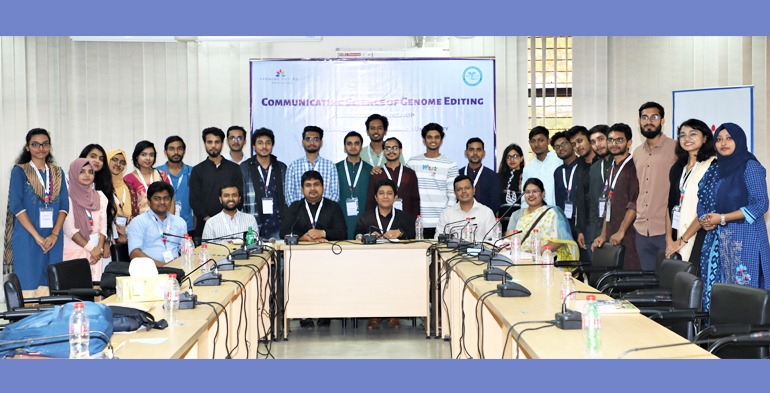 Agrilife24.com: To generate more passion and excitement about science and create awareness about the role of biotechnology in dealing with food security and climate change, Jahangirnagar University (JU) held a 2-day event called Communicating Science of Genome Editing. The event was held on the 2nd and 3rd of December by the University’s Biotech Club on campus premises, in collaboration with farming Future Bangladesh(FFB), and was participated by students from various departments.

During the program’s inception, Farming Future Bangladesh's CEO & Executive Director Md Arif Hossain said, "Agricultural biotechnology has helped farmers lower their production costs over the past few decades while also improving food quality and quantity around the world. However, the insect-resistant Bt brinjal is the only genetically modified crop that Bangladesh has so far accepted."

In a televised presentation, Dr Md Tofazzal Islam, founder-director of Institute of Biotechnology and Genetic Engineering at Bangabandhu Sheikh Mujibur Rahman University of Agriculture, Bangladesh, spoke on the application and usefulness of agro-biotechnology/gene editing in Bangladesh. He mentioned that advancements of technology have become a global phenomenon and that unless we adopt these measures as well, our society and people will fall back further.

The event covered a range of issues, delving into science communication and agribiotechnology, scientific message development, and fighting bad science. The participants joined practical sessions on these issues along with a skills development training on project planning and implementation.

The FFB team provided technical support to the training session at the program.

Farming Future Bangladesh (FFB) is a comprehensive communications initiative to help improve awareness about modern agricultural innovations, including crop biotechnology in Bangladesh. Based in Dhaka, it operates under the auspices of the Cornell Alliance for Science, of Cornell University, USA with support from the Bill & Melinda Gates Foundation.