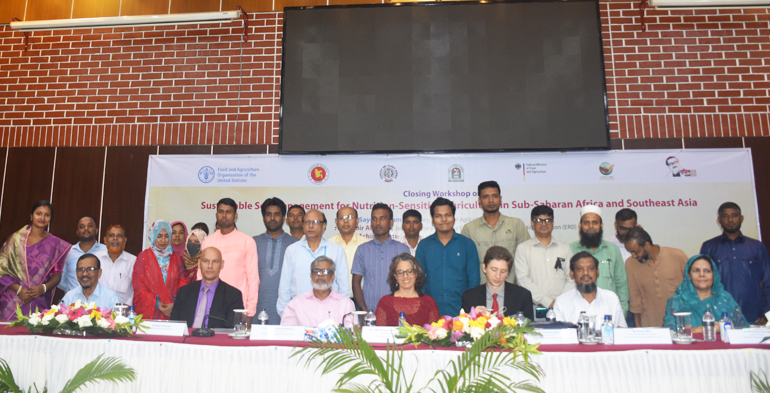 Agrilife24.com:Food and Agriculture Organization of the United Nations (FAO) organized a workshop on the close of the project “Sustainable Soil Management for Nutrition-sensitive Agriculture in Sub-Saharan Africa and Southeast Asia.”

In order to improve the nutritional value of foods grown locally, the Government of Bangladesh and the Global Soil Partnership (GSP) initiative of the Food and Agriculture Organization of the United Nations (FAO) launched the project in September 2019 with funding from the German Government. Its goal is to promote and support the use of Sustainable Soil Management (SSM) for nutrition-sensitive agriculture. The Bangladesh Agricultural Research Council (BARC) and the Soil Resource Development Institute (SRDI) of the Ministry of Agriculture implemented the project. In addition to Bangladesh, FAO has executed the initiative in Malawi and Burkina Faso.

The goal of the "Sustainable Soil Management for Nutrition-sensitive Agriculture in Sub-Saharan Africa and Southeast Asia" project was to develop recommendations for SSM policy guidelines based on existing knowledge and a multidisciplinary approach to show the role of soil in human health. The project activities included field demonstrations in three Upazilas in Bangladesh, as well as a baseline survey of 600 farmers, 45 field demonstrations, awareness development training for 180 stakeholders, and soil doctor training for 450 farmers.

The majority of the world's food is derived from soil, which is a critical resource and an important part of the natural ecosystem. Increases in population, increased food demand, and competing land uses are all putting stress on soils.

More than half of the people in Bangladesh are malnourished, and 450 000 children have severe acute malnutrition. Consumption of nutrient-deficient staple crops cultivated on nutrient-depleted soils is a potential contributor of nutritional deficits.

More than a quarter of our planet's biodiversity lives in the soil, but, we only know around one percent of this hidden cosmos. A single teaspoon of healthy soil contains billions of microorganisms. Soil organisms are important for a variety of critical ecological functions on which humans rely, including especially the solubilization of soil nutrients to make it available for the plants. Despite this, the biodiversity of the soil is in danger as a direct result of improper soil management, which has an effect on the life that exists below the surface and on food security.

The German government prioritizes soil protection and nutrition-sensitive agriculture. In 2022, Germany's Global Forum for Food and Agriculture GFFA led a Communiqué on soils protection signed by 70 Agriculture Ministers. This communiqué, as well as the involvement of Germany's Minister of Food and Agriculture in the 10th anniversary of the Global Soil Partnership, emphasized the FAO's role in achieving global soil conservation.

Robert D. Simpson, FAO Representative in Bangladesh, said “Global soil degradation is estimated at 33 percent, and policymakers around the world are looking for solutions to implement the Sustainable Development Goals (SDGs) to combat this challenge.”