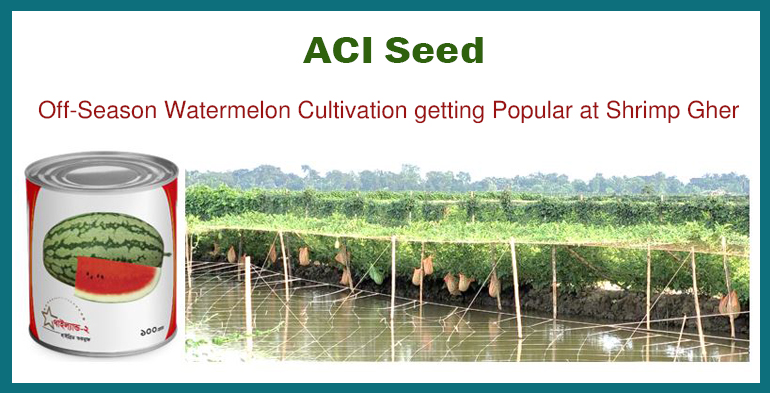 Agrilife24.com:Watermelon is becoming popular for southern farmers especially in shrimp Gher areas of Bangladesh. Farmers who are engaged in Gher farming have brought about dramatic change in the society as well as to the institutions that govern the local and the regional economy. In addition to the common fish farming, farmers of Gher area are cultivating profitable crops like watermelon. It brings additional benefits for them.

ACI Seed is promoting a profitable watermelon variety named Thailand 2 to bring economic change for the community. Thailand 2 is highly profitable for Gher area crop farming, especially at Khulna, Bagerhat and adjustment areas. Thailand 2 is a dragon skin type variety with brix percentage 14%. It is becoming popular among farmers for its higher marketability.

To capture off-season market farmers of Dumuria Upazila, Khulna District planted 1500 plants around the Gher. The variety gives around 3-4 fruit per plant with an average yield of 10-12 kg/plant. It results in an estimated yield of 16.5 MT. The off-season average market price is 25 taka/kg (expected). The ultimate return is Tk. 0.41 Mn with an expected net profit 0.30 Mn. ACI Seed is expecting to get a good market response for watermelon seeds from these areas.