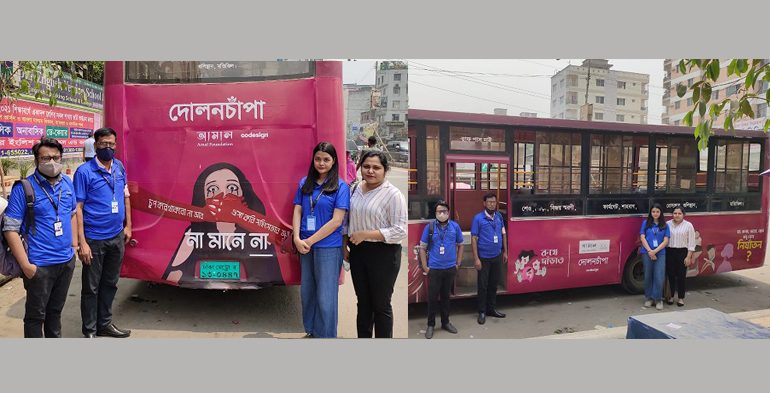 Abul Bashar Meraz:We usually write about the equal rights of men and women on paper or practice it in our daily conversation. But women's oppression, and women's rights are still not implemented. However, many women are not even aware of their rights in terms of their daily movement. This time, the Amal Foundation, a voluntary organization featured in Forbes Magazine, has taken an exceptional initiative to make those abused, disenfranchised women aware of their situations and ways of how to establish their rights.

As part of social awareness, the organization has taken initiative to make women aware of various demands on public transport buses. Esrat Karim Eve, the founder and director of the organization, said that the initiative will be taken not only in the capital but also in different parts of the country step by step.

It is learned that the work has been done under the stand - up program to make women aware.  Dolanchapa bus authority and Co-design have also cooperated in this initiative to share their voice in the movement of women rights.

Esrat Karim Eve, founder, and director of the Amal Foundation, said that women are being abducted, raped, humiliated, and neglected all the time. In that society, how can we say in a thunderous voice that equal rights for men and women have been ensured? The woman who is constantly being the victim of these incidents may be your mother-sister or can be the girl from next door. Violence against women is a daily occurrence in our society today. Everywhere in the house or outside, women are constantly being the victims of reckless harassment by scoundrels. Lately, its level has increased many times over. The people of the society are not shying away from committing heinous acts like torture and rape by focusing on a trivial matter.

Esrat further said, women in our country are being tortured in various ways today. Some are hiding these incidents out of shame and some are committing suicide as they cannot bear the mental pain. Being a victim of rape for not agreeing to a love proposal. Some are losing their lives in their demonic attacks. Various tortures are also happening in the case of married women. The abuse and humiliation from husband make those women helpless and their life unbearable, which eventually turn the relationship in vulnerable.

However, there is no escape, to attack again or to take revenge. Another horrible side is dowry which is engulfing our society. Dowry is a social disorder. And there is no counting the number of men in the society affected by this disease who are constantly committing the worst incidents of violence against women. Amal Foundation is working to stand by those abused and neglected women. I am conducting a campaign to stop sexual harassment and violence against women. At the same time, Amal Foundation encourages the provision of legal aid and support to the victims.