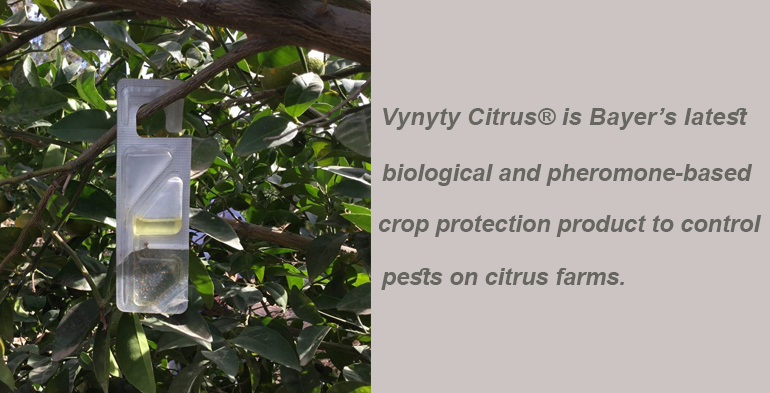 International conference for horticulturists marks debut of Bayer’s latest crop protection product
Agrilife24.com desk:Bayer will introduce Vanity Citrus®, its latest biological and pheromone-based crop protection product to control pests on citrus farms during the International Symposium on Horticulture in Europe–SHE2021, March 8-11. Bayer is a main sponsor of the event, which invites scientists and industry leaders to discuss the latest achievements and developments in horticulture. Bob Reiter, Head of Research and Development for Bayer Crop Science is a SHE2021 featured speaker. He will discuss the company’s R&D strategy for fruits and vegetables.

Vanity Citrus® is an innovative device–a container with an active liquid inside–that does not generate resistance or residues in harvests or in the environment. It is the first such product on the market that is formulated with pheromones and natural pyrethrum to control pests in citrus fruits. Pheromones effectively control pests by interfering with their mating behaviors, thus preventing their reproduction.

The product is currently being used in Spain and will soon be available to growers of citrus and other crops in other Mediterranean countries. It is licensed for commercial use by Ecología y Protección Agricola (EPA) in Valencia and provides 400 days of pest control.

Vynyty Citrus® is formulated to gradually reduce the invasive pest populations of three species: California red louse (Aonidiella aurantii), citrus cotonet (Planococcus citri) and South African cotonet (Delottococcus aberiae). The South African cotonet, due to its rapid expansion in recent years and the deformities it causes in citrus fruits, is considered the most invasive fruit pest and the one that alarms growers the most.

“With this, we manage to control and gradually reduce the populations of these species with a more sustainable solution, which does not generate resistance or residues in the harvest or in the environment and, moreover, acts 365 days a year,” said Javier Pérez, Head of Bayer Crop Science Fruit Crops in Spain.

Currently the plague of the South African cotonet is affecting more than 40,000 ha of citrus fruits in the Valencian Community. As a result, the pest is causing the deformation of fruits which not only prevents them for commercial use, but it is also forming new colonies within citrus areas located on the Spanish eastern coast.

Vynyty Citrus® complements the strong biological portfolio of Bayer which includes Serenade®, BioAct™ and Flipper® that were broadly adopted by European growers to strengthen sustainable production concepts and improve the quality of produce with low residue levels. This biological solution responds to Bayer's commitment to help reduce the environmental impact of crop protection by 30% by 2030 without reducing crop yields.

The launch of Vynyty Citrus® at this year’s SHE2021 event coincides with 2021 being designated as the International Year of Fruits and Vegetables by the United Nations.