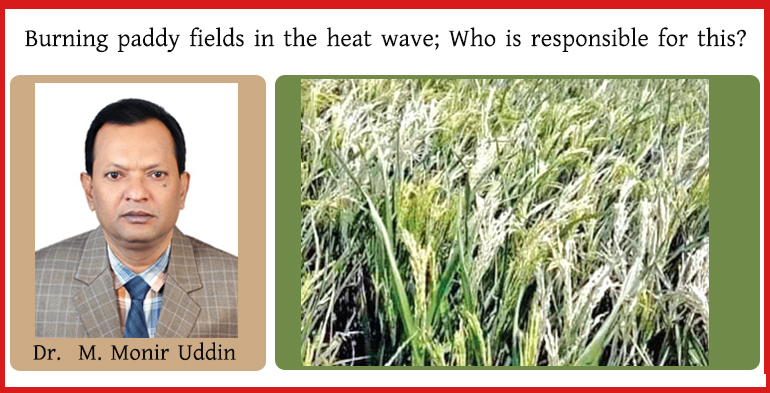 Dr. M. Monir Uddin:On the night of April 04, 2021, thousands hectares of paddy fields were destroyed by the hot wind blowing over the Haor area of the country. In a moment, the dream of harvesting crops was shattered by thousands of farmers. In the Coronal world, when food production is being disrupted in many countries, food shortages have occurred in many countries. But the agricultural sector has kept the overall economy of Bangladesh active even after the cyclone Ampan and 4 consecutive floods in 2020 along with Corona. During the 2021 boro season, the Ministry of Agriculture made a concerted effort to accelerate boro paddy production with special incentives and as a result, boro paddy was cultivated on more than the target i.e. 48.84 lakh hectares. Of this, hybrid paddy is cultivated in 12 lakh 13 thousand 450 hectares of land.

Haor region of Bangladesh consists of Netrokona, Kishoreganj, Habiganj, Moulvibazar, Sunamganj and Sylhet districts. The Haor Basin in the northeastern part of Bangladesh is an internationally important wetland. The Haor Basin is bordered by the mountains of Meghalaya in the north, Tripura and Mizoram in the south, and Assam and Manipur in the east. The basin extends to the northern foothills of the Garo and Khasia Hills, and to the east is the Indian border along the Surma Valley. The total area of Haor Wetlands in Bangladesh is 80,000 sq km. There are about 47 large haors and 6300 beels in the haor area. Of these 6300 beels, 3500 are permanent and 2600 are seasonal beels. The only source of livelihood for the people of Haor is boro paddy cultivation which is very much dependent on nature. In other words, if the water from the upstream slope of the neighboring country enters the haor area in advance, it sinks before harvesting. In this way, in some years, the people of Haor can take the crop home and in another year, a sudden downpour destroys the crop in front of their eyes. This is how the life of Haor people goes through hardships.

Due to the strong efforts of the government and the hard work of the farmers, the condition of boro paddy cultivation in the Haor area is quite good this season. In many lands, hybrids and other early varieties have been cultivated so that farmers can safely pick up paddy before the floodwaters come. Due to which most of the boro paddy in Haor has gone out flowering and some of them have gone to the grain stage and most of the paddy panicle have gone out to the milking stage. In such a situation, on the evening of April 04, 2021, dust storm with hot air first hit some districts of the country and later it rained in some districts. But farmers feel uncomfortably hot at night after just a dust storm in the Haor area. At this time high temperature wind blows over the haor and the tops of all the lands on which it passes are burnt in the heat and turn white. It may be mentioned that boro paddy was planted in 450,000 hectares of land in Haor area this year and at least 14,000 hectares of boro paddy was lost in the heat wave.

Who is responsible for this irreparable loss of the farmer? If we put it in simple terms, then maybe we will place the responsibility on nature. But the question is why nature is so angry with the farmers of Bangladesh? Last year, the country's farmers, along with Corona, fought hard to take the country's agriculture forward by fighting cyclone Ampan and 4 times floods. In the new year, when the farmer has started farming with renewed vigor, while the panicle of paddy fields are swaying in the fields of Haor, the hot wind of nature has thwarted the farmer's dream of taking home golden paddy in a moment.  At the root of this hostility to nature is the negative effect of global climate change. With some data, we will look at what is responsible for the negative effects of global climate change and why it is happening.

Another harmful element responsible for the increase in temperature in nature is methane. At the time of pre-industrialization, the world's annual emissions of methane gas were 3.2 billion tons. The world's methane emissions growth rate is 1.8 percent per year. China, India, Russia and the United States are the top four countries in the world in terms of methane emissions. Methane gas is 23 times more responsible for temperature rise than carbon dioxide. Many more toxic elements such as nitrous oxide, carbon monoxide, chloro-floro carbon, etc. are being added to nature due to industrialized countries.

Scientific studies have shown that in the last 100 years, the temperature of the earth's atmosphere has risen by 6 degrees Celsius. Many scientists say that by 2050, global temperatures will rise by 5 degrees Celsius. And, it will increase the height of the sea level by half a meter. A NASA study found that the Arctic region lost 14 percent of its ice in the North Ocean. This means that the amount of permanent ice equal to the area of 280,000 square miles has decreased. Many parts of the world will be lost in the molten ice water of the two poles, of which Bangladesh ranks 6th. According to the IPCC study, if the sea level rises by 1 meter, 17-20 percent of Bangladesh's land will be submerged and as a result, 2.5 crore people will become climate migrants. According to the 2015 Paris Climate Conference of the United Nations, the average temperature in Bangladesh could rise to 1-1.5 degrees Celsius by 2050, which will adversely affect crop production. Countries in Africa, South Asia and Central Asia are facing extreme water crisis due to climate change. Due to climate change, crop production in this area has decreased by about 10 to 15 percent. More than 1.8 billion people in middle-income countries are being forced to use toxic reservoirs for drinking and other household purposes. However, countries in the region are least responsible for climate change.

Agricultural production depends mainly on weather, climate and environmental factors, especially temperature, rainfall, humidity, sunlight, soil, water, wind speed, etc. Temperature severely affects the different stages of life of each crop. When the temperature rises, the lifespan of the crop becomes shorter. As a result, the yield is greatly reduced. Just as low temperatures are detrimental to crops, so are high temperatures. The unbearable hot temperature for rice is 35 degrees Celsius. If the temperature persists for 1-2 hours after flowering, the paddy becomes empty grain.

Bangladesh is one of the largest deltas in the world which has been a land of natural disasters since very beginning. Natural disasters have hit the country with 22 cyclones from 1970 to 2020. From 1953 to 2020, there were a total of 49 floods in the country. Bangladesh is the 8th most populous country in the world. According to the study, the country's rainfall will increase by 10-15 percent by 2030 due to climate change. If the sea level continues to rise due to rising temperatures, 22,889 square kilometers of Bangladesh, or 15.8 percent of the total area, will be submerged. That is why British journalist Johan Harry, according to the United Nations Council on Climate Change (IPCC), sees Bangladesh as "born in 1971 in blood and death in 2071 in water." According to a survey by the Global Carbon Project, carbon emissions reduced by 7% to 2.4 billion tons in 2020 due to lockdowns and communications restrictions during the Corona pandemic, the first in world history. Biofuels and industrial plants emitted 34 billion tons of carbon in 2020.

Bangladesh is not responsible for climate change at all but Bangladesh is one of the most vulnerable countries in the world to climate change. The way the country's temperature has already raised has had a negative impact on agriculture long ago. Sea saline water is entering local rivers and canals in coastal areas. There are indications that in the near future, 2.5 crore people in the country will be affected severely by climate change.

We have seen that a small number of people from different countries try to cross the sea at the risk of their lives to enter the developed countries but are not allowed to do so. Many times they were rescued and kept in jail and later pushed back to their homeland. But populous Bangladesh has been providing shelter to about 12 lakh Rohingyas since 2017. Bangladesh is the only country in the world that has set a great example of humanity by sheltering so many Rohingya. But today Bangladesh is in a vulnerable condition in the world due to the industrialization of developed countries.

From the above data and discussion, it can be said that many lives are being lost due to climate change every year. Therefore, today is the time for the leaders of every country in the world to sit together and make decisions collectively, avoiding the rich, the poor, religion and caste. The way we have heated the earth with toxic gases since human civilization must be brought back to a tolerable level. Natural disasters such as hurricanes, typhoons, cyclones, tidal surges, extreme floods, droughts, desertification, etc., which occur in different countries of the world, all have the effect of hostile nature. Today's Corona pandemic is also the result of human encroachment on nature. The rich countries of the world have to come forward in this regard.

Besides, world leaders have to stand by Bangladesh in this difficult time. It is the responsibility of the industrialized nations to protect the people of Bangladesh who are emitting excessive amounts of carbon and hurting the farmers of Bangladesh without any guilt. It is not a pity for the people of Bangladesh but their right to be protected from the clutches of climate change. According to the Paris Climate Agreement, in order to keep the world safe, industrialized countries must first take steps to reduce their carbon emissions, as well as provide the necessary technical and financial assistance to protect vulnerable countries, including Bangladesh.

Agronomist, Columnist and development worker
E-mail: This email address is being protected from spambots. You need JavaScript enabled to view it.