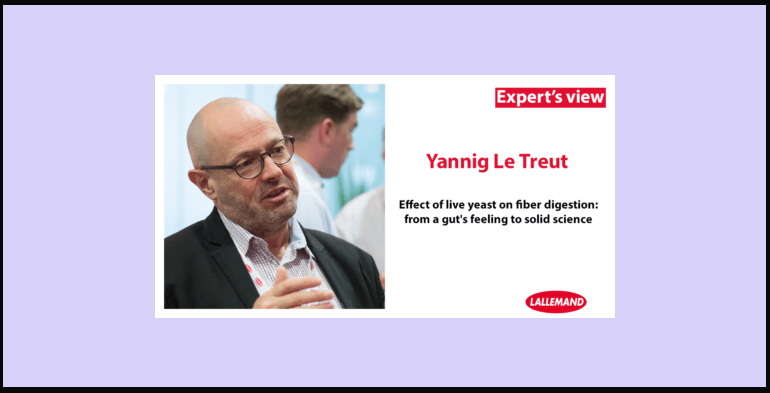 Research desk:Before becoming Lallemand Animal Nutrition General Manager in 2012, Dr Yannig Le Treut has been a swine vet and and a convinced user of live yeast Saccharomyces cerevisiae boulardii CNCM I-1079. In this interview he is giving us an historical perspective on how the whole “live yeast effect on digestibility” story started…

“First signs came in 2005 when we started the application of S. cerevisiae boulardii CNCM I-1079 in sows in Britany. At the time, certain farmers, called us after 5-6 months asking why we did not warn them about the effect on sow body condition!  We were surprised at first as they told us they had to reduce the feed level to prevent the sows from getting too fat. This is what motivated us to look into this effect more carefully.

After a couple of years, we had cumulated many field evidences and we could formulate the hypothesis that S. c. boulardii could improve the net energy value of the diet by 2-3%.”

So you didn’t perform any specific trial to highlight this effect?

“We did set up research trials with very precise metrology allowing us to assess individual sow and piglet live weight, as well as feed intake. From there we used the INRA equations that allowed to evaluate exported energy and compare these to feed energy value. However, there is a limit to these equations: an important standard deviation, lack of precision. It does not allow us to statistically measure a 3% difference in energy. However there was a numerical difference and this calculations did not contradict the hypothesis that S. c. boulardii valorize this type of feed by 2-3%.”

What was the next step?

“Focusing on fiber degradation, definitely! In the past 25 years, gestation diets have tremendously changed, with raw cellulose going up from 3-4 % to 8%, and today, all feed companies are focusing on fiber characterization. Until then, the role of the hindgut in swine had been totally overlooked. According to Jean Noblet, this represents 25-35% of the energy produced during digestion in sows, according to the nature and quantity of the fiber in the diet. At this point we entered a program to better explain S. c. boulardii effect in the hindgut on fiber digestibility in partnership with a Danish team.”

And what was the idea of this study?

“We knew about live yeast in ruminant, the fact that it improves the rumen environment and function through oxygen scavenging. We assumed that it works the same way in the sows’ hindgut!  This study clearly showed that S. c. boulardii had an effect on fiber degradation ex vivo. It was not gut’s feeling or visible signs anymore! We had scientific evidences that S. c. boulardii improves energy digestibility in sow through fiber degradation improvement in the hindgut.”

This is how we ended up with the study performed by Etienne Labussière at INRA Pegase?

“Exactly. By using the metabolic chambers that were used to define the Net Energy system, we obtained the same level of significance than in the experiments that conducted to the NE system: these results are really robust. Results showed significant effect on energy retention, both under normal temperature and heat stress, this really confirmed the effects. We showed significant improvement of energy digestibility around 2%-2.5%.” 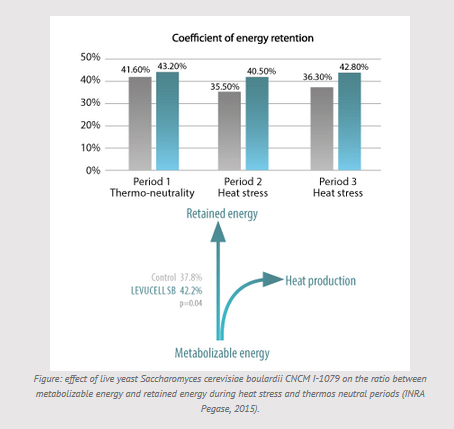 What would be the mode of action that explains the interaction between live yeast and energy saving in pigs?

“On one side, the better valorization of the fiber through improved hindgut environment (redox potential through oxygen scavenging).

On the other, we assume we may also have a lower need for maintenance energy with the probiotic due to the local and systemic anti-inflammatory effect of S. c. boulardii. This has been shown in LPS challenge and under normal conditions.”

How do you apply it in gestating and lactating sows?

“For lactating sows, with feed intake the major issue, especially in heat stress period, I would just add S. c. boulardii  on top to bring the sow extra energy. It does prevent the sow from utilizing energy from fat and muscle which has a negative impact on future cycles.

In gestation, this new results reinforces the idea of giving an “energy value” to S. c. boulardii. This could be done only if the probiotic is used during the whole cycle, or at least 2/3 of the cycle. In this case, we can slightly decrease the level of energy of the diet adding S. c. boulardii. Here, raw material will have an influence: the more fibrous material, the better the effect. However, we have to keep in mind that S. c. boulardii is not like enzymes and energy is not its primary benefit, it is more an additional benefit.”

In conclusion, what would you consider as the primary benefit of S. c. boulardii?

“The cornerstone of pig production is the farrowing: if it is successful, the cycle is successful and the following cycle is well prepared. S. c. boulardii has proven effects on sow transit and gut microflora around farrowing with positive impact on the farrowing process, sow health and piglet growth. We have also seen effects on sow immunity and colostrum quality, which in turns offer better protection to the piglet through colostrum.

Benefits are on performance, immunity, health, reproduction, longevity…when we are convinced that these are profitable for the farm, then the energy value is a benefit on top!”